An earthquake is a sudden, rapid shaking of the ground caused by the shifting of rocks deep underneath the earth’s surface. Earthquakes can cause fires, tsunamis, landslides or avalanches.

While they can happen anywhere without warning, areas at higher risk for earthquakes include Alaska, California, Hawaii, Oregon, Puerto Rico, Washington and the entire Mississippi River Valley. 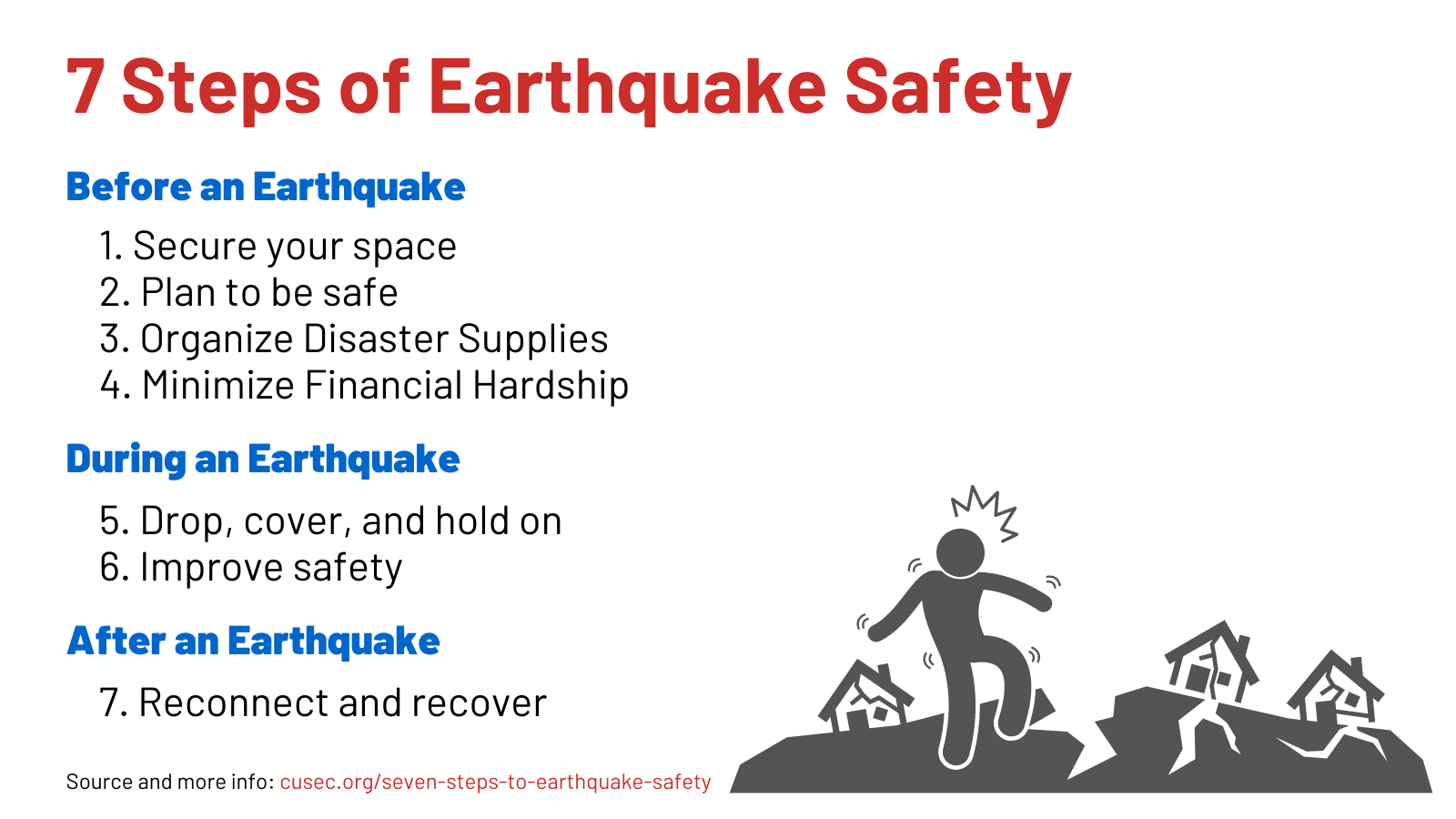 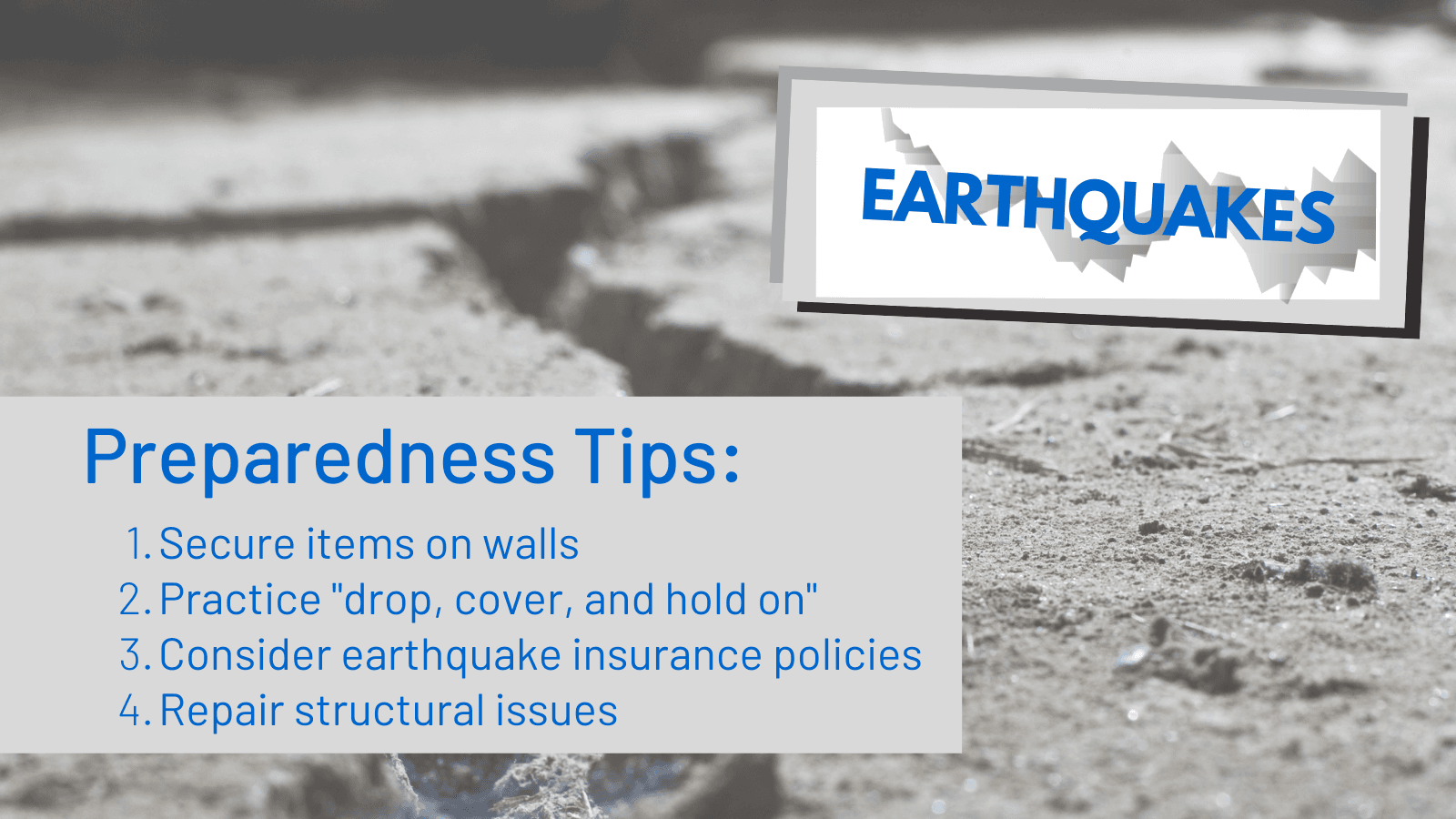 Familiarizing yourself with these terms will help you to understand earthquake hazards:

Earthquake: a sudden slipping or movement of a portion of the earth’s crust, accompanied and followed by a series of vibrations.

Aftershock: an earthquake of similar or lesser intensity that follows the main earthquake.

Fault:  a fracture along which the blocks of crust on either side have moved relative to one another parallel to the fracture causing an earthquake. The slippage may range from less than one inch to more than 10 yards in a severe earthquake.

Epicenter: the place on the earth’s surface directly above the point on the fault where the earthquake rupture began. Once fault slippage begins, it expands along the fault during the earthquake and can extend hundreds of miles before stopping.

Seismic Waves: vibrations that travel outward from the earthquake fault at speeds of several miles per second. Although fault slippage directly under a structure can cause considerable damage, the vibrations of seismic waves cause most of the destruction during earthquakes.

Magnitude: the amount of energy released during an earthquake, which is computed from the amplitude of the seismic waves. A magnitude of 7.0 on the Richter Scale indicates an extremely strong earthquake. Each whole number on the scale represents an increase of about 30 times more energy released than the previous whole number represents. Therefore, an earthquake measuring 6.0 is about 30 times more powerful than one measuring 5.0. 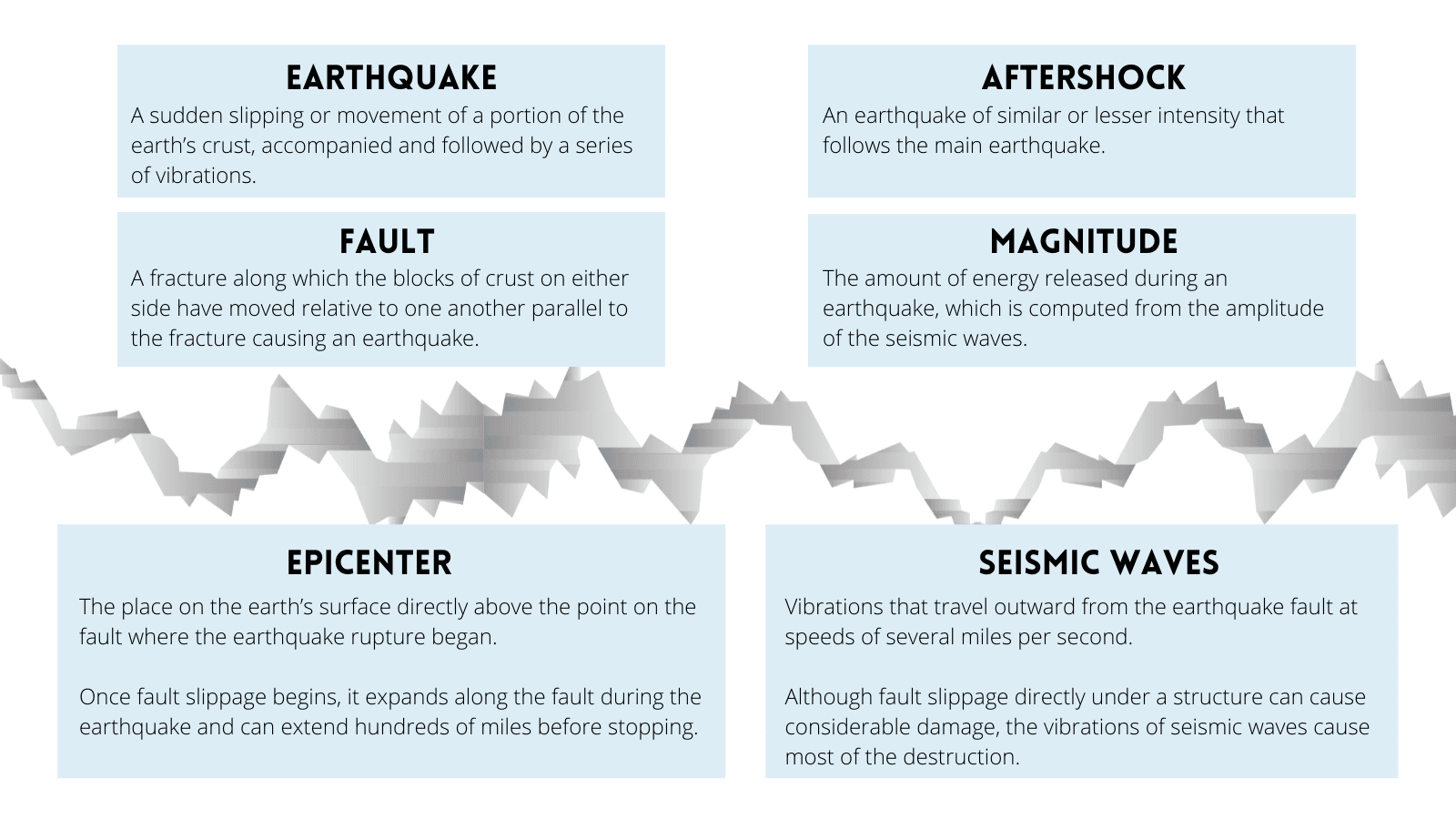 If you feel an earthquake you should minimize your movements and find a nearby safe place. Stay indoors until the shaking has stopped and you are sure exiting is safe.

If you are indoors:

If you are outdoors:

If you are in a moving vehicle:

If you are trapped under debris:

Immediately after an earthquake: 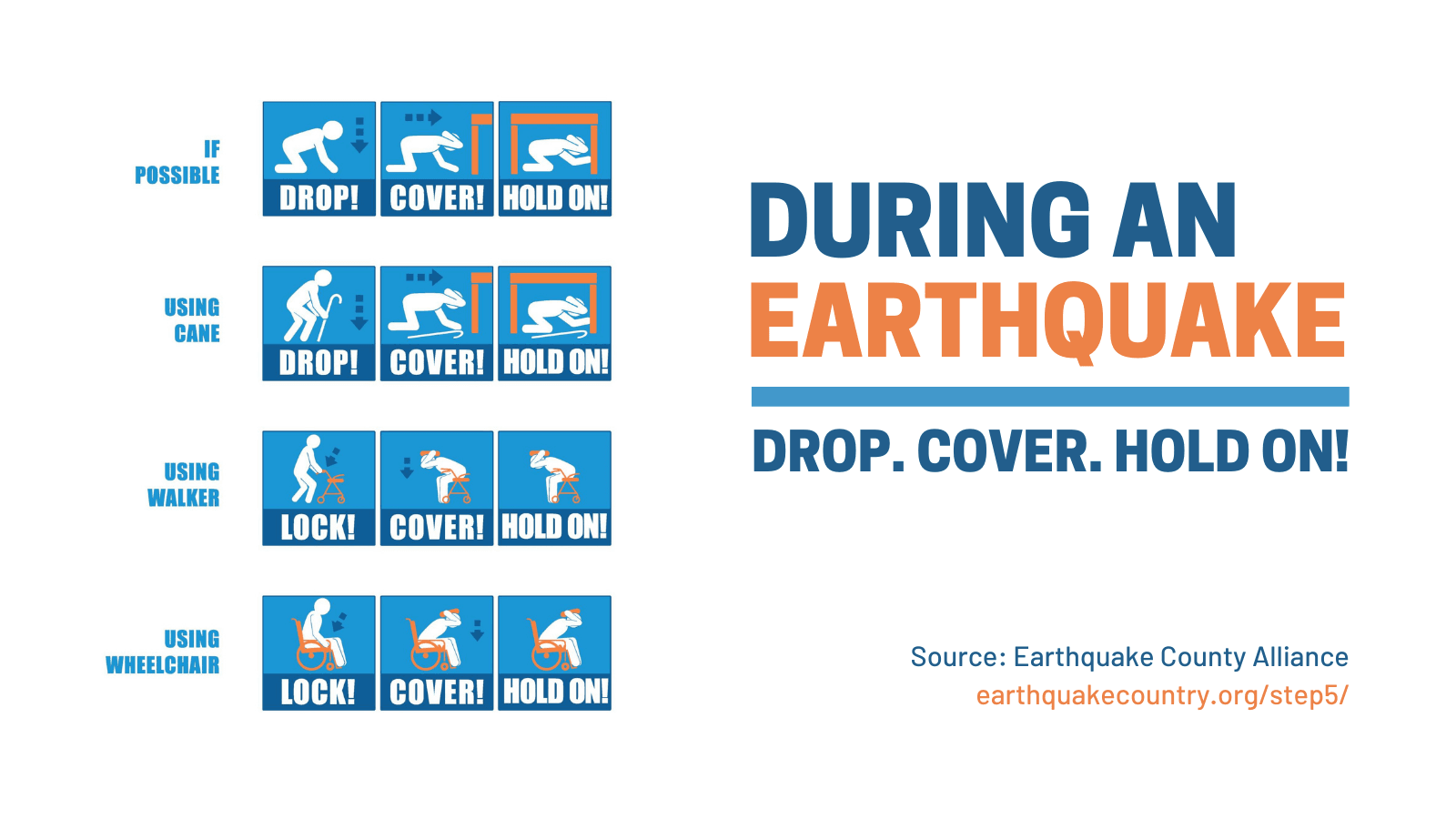 Using alert systems is crucial to being informed before and during earthquakes, just as with any other disaster. Our alert systems page has resources for a number of alert options.

The Red Cross also has an Earthquake app that includes earthquake alerts and information for your area.

The Earthquake Notification Service (ENS) is a free service that can send you automated notification emails when earthquakes happen in your area.

The United States Geological Survey maintains a user-defined searchable database to see earthquakes occurring around the world which can be found here: https://earthquake.usgs.gov/earthquakes/search/ 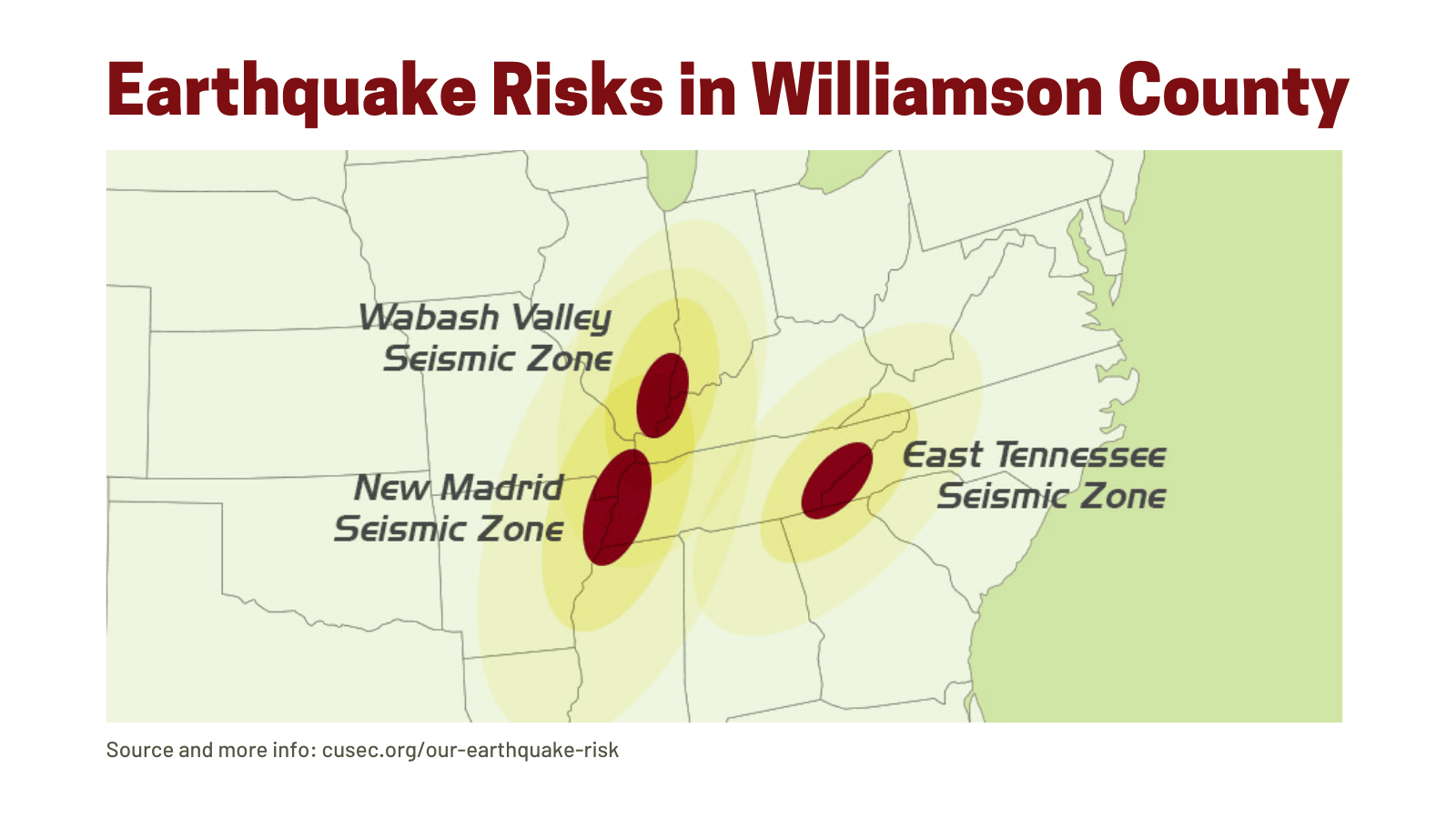 History of earthquakes in Williamson County

Williamson County is in close proximity to the major intraplate (within a tectonic plate) seismic zone known as the New Madrid Seismic Zone (NMSZ). The NMSZ is an approximately 120-mile long fault system that stretches across five states including Western Tennessee. 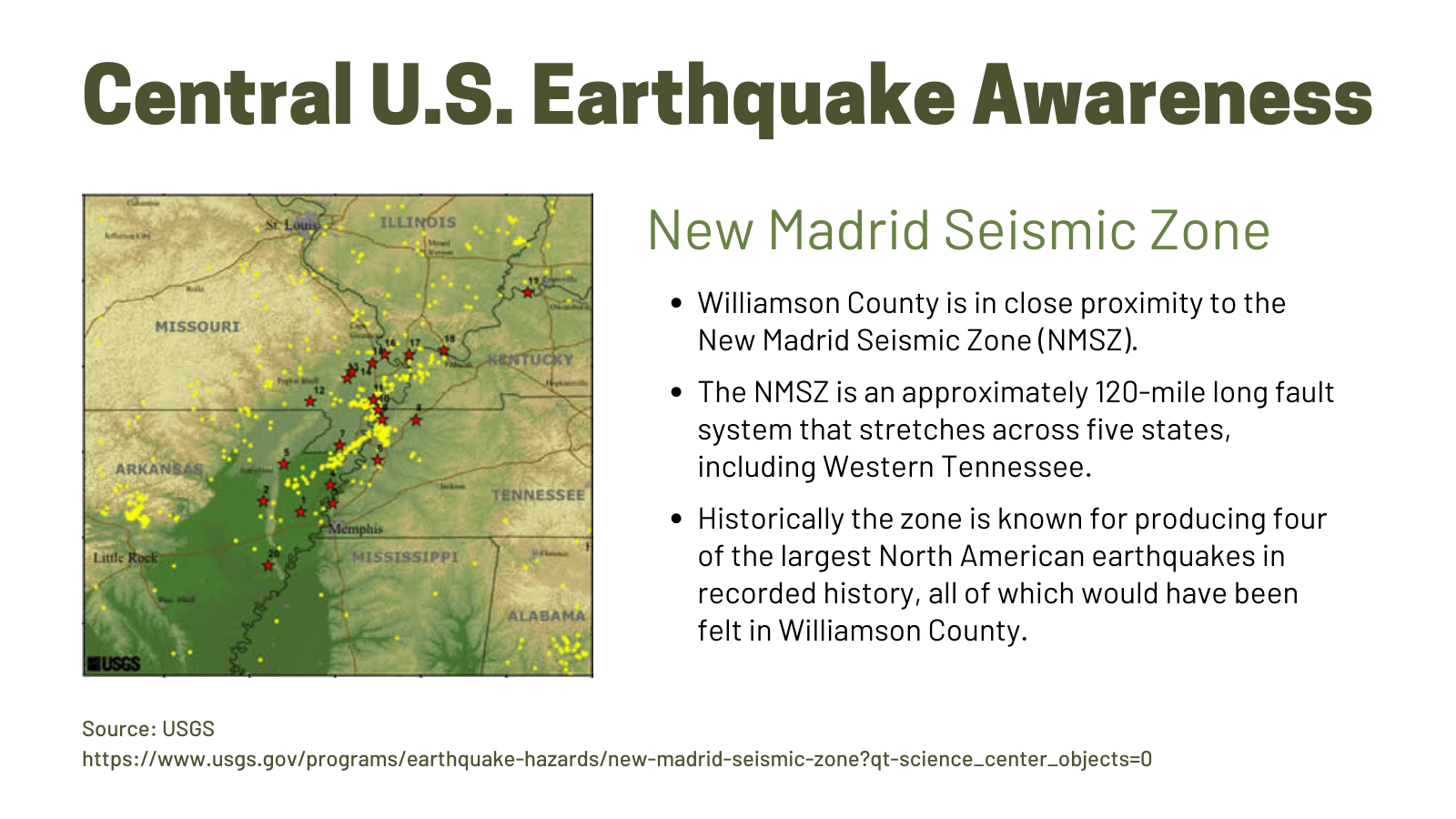 Historically the zone is known for producing four of the largest North American earthquakes in recorded history, all of which would have been felt in Williamson County. This includes the noted three-month period between December 1811 and February 1812 that had quakes reaching Richter Scale magnitudes into the 7.0 through 8.6 ranges. 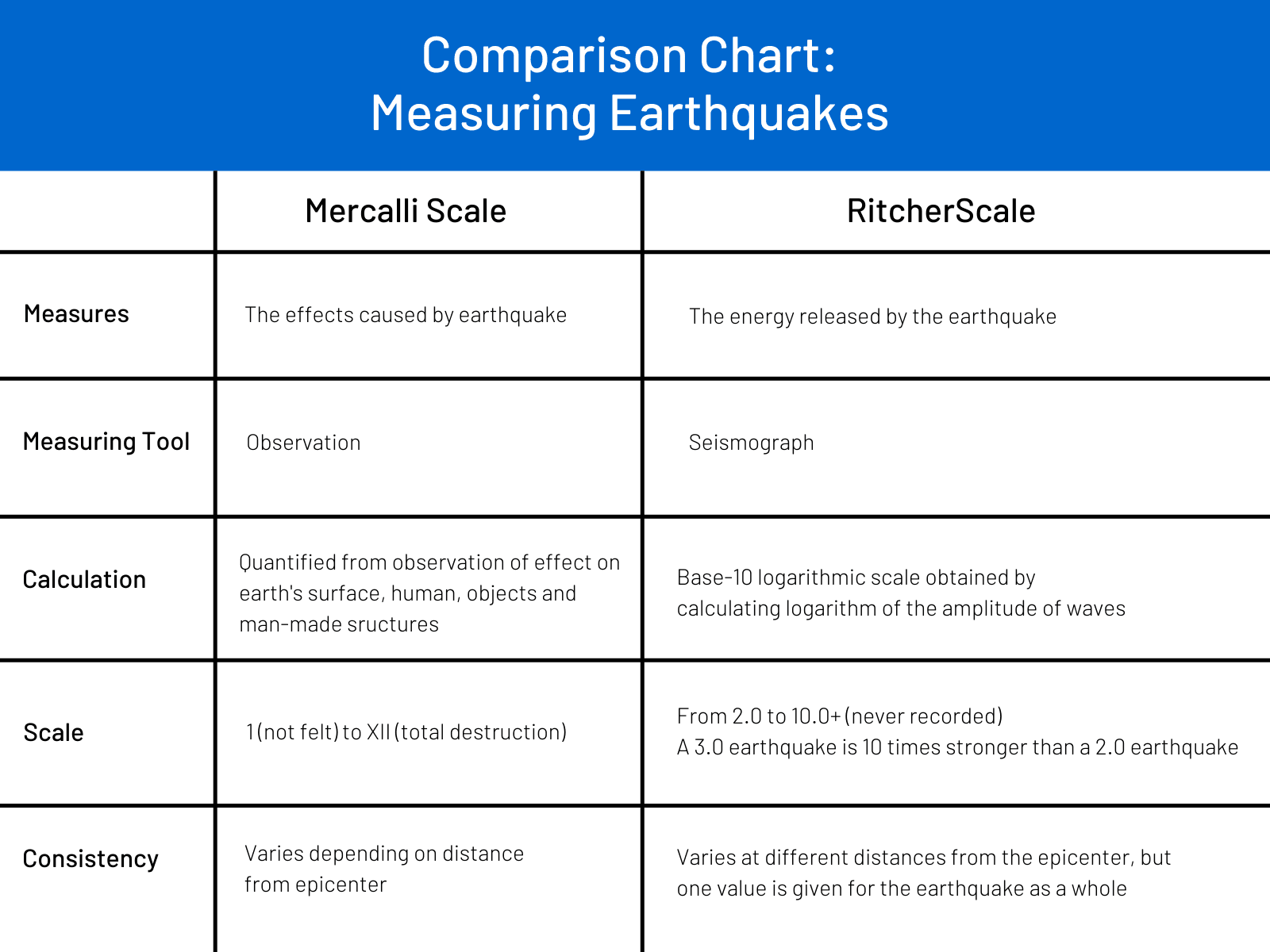 Since the 1812 earthquakes, the largest recorded quakes from this zone were the October 1895 6.6 magnitude quake (epicenter Charleston, MO) and the November 1968 5.5 magnitude quake (epicenter in Dale, IL). From the time when seismic measurement instruments were installed in and around the zone in the 1970s, more than 4,000 small earthquakes have been recorded, with the vast majority being too small to be felt.

According to a FEMA report filed in 2008, a serious earthquake in the NMSZ could result in the highest economic loss due to a natural disaster in U.S. history, causing widespread and catastrophic damage across a seven-state radius with most of the worst impacts taking place in Western Tennessee (includes Williamson County). Based on this report, a 7.7 magnitude quake in the NMSZ would result in thousands of fatalities, damage to structures, negative social impacts, economic loss, and total disruption of vital infrastructure in Western Tennessee. 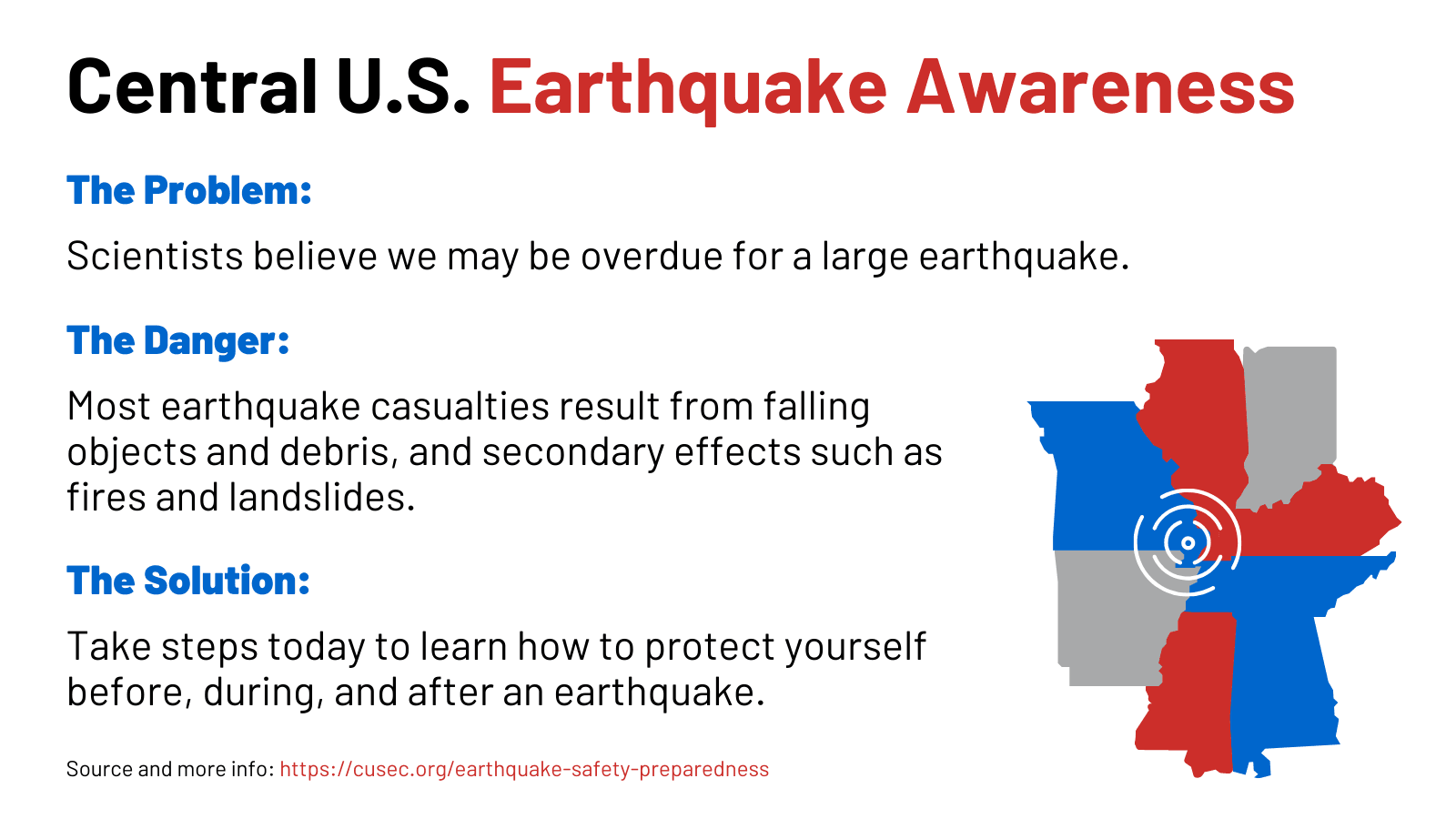 The current lack of apparent land movement along the NMSZ has long puzzled scientists. Currently GPS measurements show that the NMSZ faults are moving no more than 0.0079 inches a year. In contrast the San Andreas Fault in California moves up to 1.5 inches a year. This has led some researchers to believe that the fault may be “shutting down” while others say it is a “sleeping giant.” These differing views have made it difficult for public policymakers to decide on if and how much to prepare for and spend on mitigating a potential large-scale earthquake.

Williamson County uses a simple system called a vulnerability calculator to determine each jurisdiction’s vulnerability to hazardous events, as shown in the charts below. 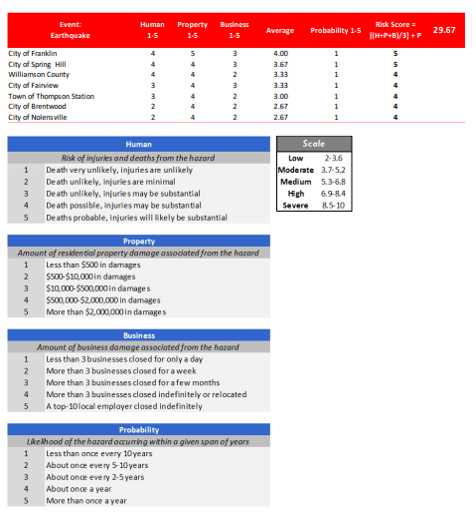